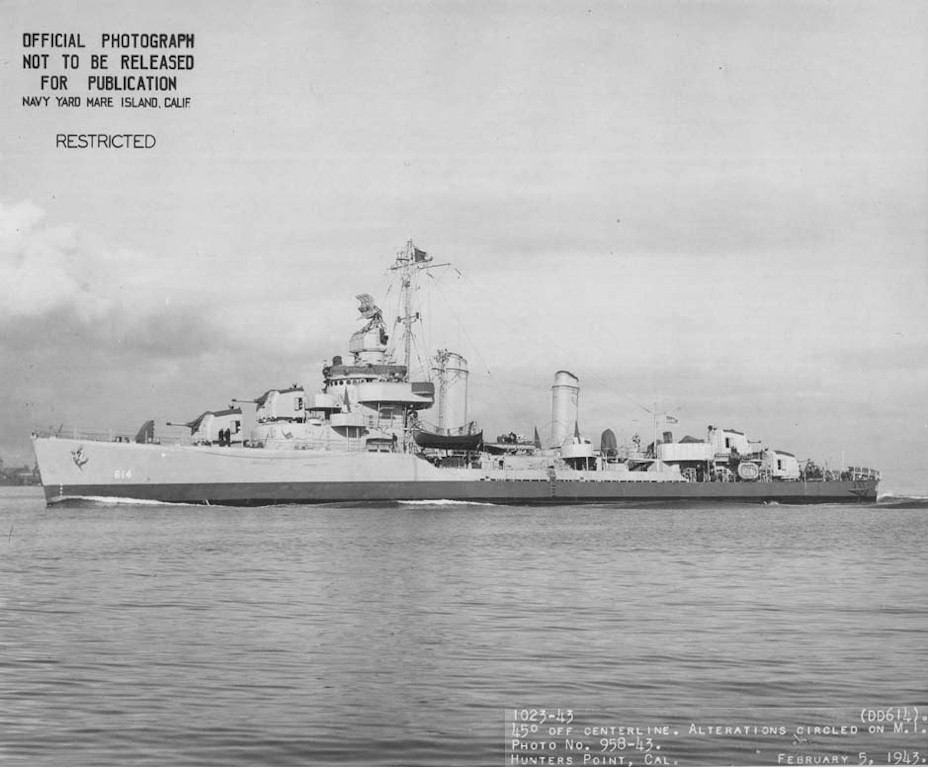 My father enlisted in the United States Navy in January 1942.  He trained at the Radar Maintenance school at Treasure Island, CA, from February to August 1942.

In December 1942 he was assigned to the newly commissioned destroyer, the USS MacKenzie, DD-614.  He served aboard the MacKenzie until October 1945.

The MacKenzie, a Bristol class destroyer, was laid down 29 May 1941 by the Bethlehem Steel Co. - San Pedro, CA.  It was launched 27 June 1942 and was sponsored by Miss Gail Nielsen, descendant of Lt. Commander Alexander S. MacKenzie. It was commissioned 21 November, Commander D. B. Miller in command.

The MacKenzie transited the Panama Canal 1 March 1943, after completion of shakedown and training cruises, and continued on to spend her entire World War II career in the Atlantic and Mediterranean theaters.  She arrived at Casco Bay, ME on 13 March and commenced coastwise escort duties.  In May, she graduated to transatlantic convoy assignments, completing two voyages to the Mediterranean by the end of June.  On 16 May, she made two depth charge attacks on a sonar contact; postwar review of German records proved them successful in the sinking of the U-182.

Relieved of transatlantic duties at the end of June, she reported to the staging area for the "Cent" Attack Force, one of three such forces to initiate the Sicilian campaign.  On 9 July she departed the north African coast, arriving at Scoglitti, Sicily, the next day to screen the transport vessels and provide fire support.  Three days later, the destroyer returned to convoy duty, conducting convoys between the United States and the Mediterranean until 7 October, and then engaging in escort work between North America and the United Kingdom.  The MacKenzie was damaged while under the guidance of a port pilot at Swansea, Wales.  She was repaired at Cardiff, Wales.  She made two more ocean crossings before resuming operations in the Mediterranean.

On 18 March 1944, the MacKenzie steamed into the harbor at Naples to report for screening, fire support and antisubmarine patrol duties in conjunction with the Anzio operation.  Starting her Anzio assignments with an assist in the sinking of a two-man submarine on the 19th, she continued to provide excellent support on this front until resuming convoy duties 6 June.  Taking up the offensive again in August, the MacKenzie took part in "Operation Anvil," providing fire support for this invasion of southern France.  On 15 September, she departed the Mediterranean and headed for Boston and a 5-month repair and overhaul period.

The destroyer took up duty in the Mediterranean again in February 1945 and from 28 March through 21 April spent her days in the bombardment of the Franco-Italian border and her nights on the blockade of the Gulf of Genoa.  In May, having assisted in the continuance of an effective second front, the MacKenzie was assigned to convoy duty in the Strait of Gibraltar.  She remained in the Mediterranean after the capitulation of the Third Reich, cruising its waters until returning to the United States in July.

Upon her arrival, the MacKenzie underwent overhaul preparatory to going to the Pacific.  But, with the end of Pacific hostilities in mid-August, her orders were changed and on 4 November she entered the Charleston, SC Navy Yard for inactivation.  She decommissioned 4 February 1946 and in January 1946 entered the reserve fleet at Philadelphia, PA.  She was stricken 1 July 1971 and sunk as a target off Florida on 6 May 1974.

On 16 May 1943, the MacKenzie (Commander D.B. "Dan" Miller) was enroute to Casablanca in company with destroyer Laub, whose captain, Commander J. F. Gallaher, was senior officer of the two-destroyer task unit.

While the destroyer turned to make a second attack, Sound reported contact at 500 yards.  Miller ordered five more depth charges dumped upon the enemy.  The barrage raised the usual geyser followed by a spreading maelstrom, then silence.

For some time thereafter the MacKenzie and Laub searched in the vicinity.  But attempts to regain contact with the target proved futile.  However, at 0458 and at 0503 both destroyers heard marine explosions, similar to the blast of deep depth charges.  The destroyers searched for wreckage but found nothing.  No scraps of submarine; no oil slicks.  Turning their bows for Casablanca, the destroyers proceeded on their way.

The wreck left by the MacKenzie's handiwork was not located until after the war, when it was found in the vicinity of lat. 33-55 N., long. 20-35 W, -- in the Kriegsmarine's records.  The submarine that disappeared in that locale early in the morning of 16 May 1943 was the one sunk by the MacKenzie.  The records identified the victim as the U-182.

The Action Report regarding the attack is available here

Electrician's Mate Clifford Gregory was on the MacKenzie on that fateful night of the depth charge attack on the U-182.  After the war he wrote a book about his wartime experiences.  Regarding the attack he wrote:

"Although I was not part of the depth charge crew, I went with others on deck and looked back where the explosions occurred and to this day, I swear that we saw the nose of the sub break the water for what we thought as our first confirmed kill."

(from One Man's War by Clifford Gregory, Rewritten by Douglas Boze)

Ship's History of the USS MacKenzie from the official Navy Records

The Story of the U-182: the Commander and Crew

The V-E Day "Plan For The Day" 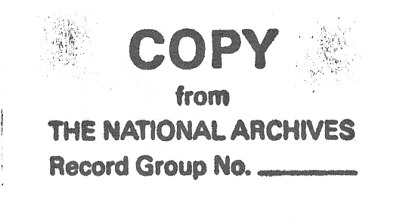 View all the Action Reports filed by the MacKenzie

How to Request Copies of Military Personnel Records

This page is especially dedicated to my Dad, Robert H. Hancock who served as a Chief Petty Officer on board the MacKenzie.

As my Dad would want it, this page is also dedicated to all "tin can" (destroyer) sailors, who unswervingly did their duty despite the great dangers of the open sea.

May we never forget your service and sacrifice.

My Dad mounted a Ham radio on a 1947 Indian motorcycle.

This is a copy of his QSL card, which he would send to successful radio contacts around the world.

I am interested in contacting anyone associated with the USS MacKenzie (DD-614).  Since this webpage was started I have heard from several crewmen or their families.

If you were a crewmen or know the address of one please e-mail me.

Eternal Father, strong to save,

Who bid'st the mighty ocean deep

Its own appointed limits keep;

Oh hear us when we cry to Thee

For those in peril on the sea.